I grew up in Solvang, California, a quaint Danish-themed town founded in 1911 by two Danish ministers and a Danish professor. Solvang, which means Sunny Field in Danish, is nestled in the Santa Ynez Valley,  a rural area full of equestrian ranches, farms, vineyards, old barns, Christian churches and long and winding roads.

People were either Christians and Catholics or ‘folks who didn’t go to church’ and the majority voted Republican. I never saw a person in a headscarf or turban the entire time I lived in the valley.

Although the majority of us lived in the surrounding countryside, downtown Solvang was a tourist town. This gave residents a chance to encounter tourists from all over the world, but they were just passing through. So you might say the closest we got to embracing diversity was selling the tourists Danish pastries, souvenirs and bottles of wine.

Walking down the covered outdoor halls in high school, it was not uncommon to see one of my cowboy classmates practicing his lasso technique in between classes. (What was his name? Junior? That sweet guy who died in a car accident our sophomore year?)

There were boys with muscles earned on the football or water polo team and other boys layered with muscles from work on their family farms.

Just before I started high school, a movie theater came to the neighbouring town a few miles away. After all these years, the town of Solvang still doesn’t have it’s own movie theatre, though it does boast an outdoor theater for theatrical performances and we celebrate Danish Days each September.

The human landscape of my school was a vast sea of milky white Caucasians (a number of which had Danish ancestry); perhaps 15 percent of students from Mexico, Central or South America, a handful of classmates with varying percentages of Chumash Indian in their blood and only three students in the entire school with gorgeously dark equatorial skin.

One year I went to high school prom with my friend Ali, who happened to be one of the three aforementioned students (in this case from Ethiopia). He picked me up in a sleek car he had borrowed from his father (Mercedes? Jaguar?) and took me to a fancy restaurant. I was so nervous in my silly black and white prom dress. My requisite high heels felt like torture to a young woman who preferred tennis shoes any given day of the week. I walked gingerly in my heels like a delicate, breakable thing, the tomboy in me appalled by the pain in my feet and the low dipping neckline of my prom dress.

Ali was just a friend, yet there it was. We were going to prom together. And surely that suggested that we were at least open to the idea of being more than friends?  I think we were both contemplating this unspoken suggestion as we sat like elegant grown ups at one of the best restaurants in the valley, the white table cloths, china plates and stylish silverware a fitting presentation for the three course meal on its way.

As we ate our first course, Ali glanced over at me, his eyes darting nervously downward to that low cut v in my neckline and back up again. I could feel the heat in my cheeks. Why was he looking there? He was such a proper young man and yet his eyes were, what, checking me out?

“Um. You’ve got, um . . .” he motioned with his elegant fingers toward that v exposing my cleavage. My eyes followed to where he was pointing and I discovered a damp spinach leaf plastered to my chest.

“Oh.” I excused myself and went to the restroom to remove the offensive leaf, wipe the olive oil and balsamic dressing from my skin and try to do something about the deep flush of embarrassment coloring my cheeks.

When we arrived at the dance, I ran into a friend (let’s call her Laura for the sake of storytelling) who had clearly gotten her hands on some wine coolers (it was the late 80s folks), as I could smell the sweet alcohol on her breath. 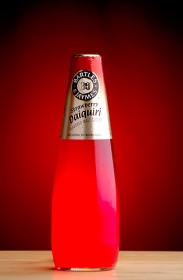 “Is that your date?” Laura asked, nodding toward Ali.

“Yes,” I responded, confused by the strange tone of her voice.

“He’s black. ” Laura squeezed her otherwise pretty face into a mask of ugliness.

I recognize racism in action just as much as the next person, but I honestly didn’t get it. If anything, I was a bit jealous of all that pigment that protected Ali’s skin from the hot valley weather while my fair skin required copious amounts of sunscreen.  And now I felt somehow judged because . . . he’s black. Yes. And?

That’s pretty much where the conversation with Laura ended. Although I’d hung out at her house a number of times, we’d drifted apart in high school and this one little act was like an invisible nail in the invisible coffin of our friendship.

I don’t think Laura was representative of the majority of people in my school, but her sentiments weren’t exactly new either. I’d heard a few derogatory comments from my classmates over the years about people of color and homosexuals, but in general, racist sentiments where usually the sort of stupid B.S. you’d hear from older generations, not people my own age. After all, we grew up post-segregation, post civil rights, post sixties. And despite the negative stereotypes culture pressed upon us through media, our idols included Whitney Houston, Michael Jackson, Prince and a long list of beautifully-tinted others. The way I reasoned, my home town was an isolated little community in the countryside, but still– everyone had heard of Martin Luther King and his dream.

I didn’t realize it at the time, but that little encounter at a school dance in my youth was a defining moment for me. I might not have had the words to express it back then, but I craved something bigger, broader, more exciting and challenging. I didn’t want to live in a monochrome world. I craved culture and diversity and friends who wouldn’t screw up their face if my prom date was black, wouldn’t blink if two guys were dancing to my right and two girls making out on my left. This didn’t come to me like some sort of manifesto of how I wanted to live my life, but it was one of many moments that have brought me to where I am now.

My views might have been affected by the fact that my oldest brother was dating a woman who was half African American, half German who would end up being his wife one day and eventually become his ex-wife. In the meantime, they would have two children whose beautiful skin tones I would also envy, and his children would grow into adulthood and bring about another generation of children with superior skin tones.

My other brother, an artist who spent some time playing in a punk band and traveled to Europe years before I even knew what a passport looked like, also played a big role in showing me what diversity looked like.

Diversity followed me wherever I went. Or maybe I sought it out, from a year at the University of Hawaii where I experienced what it was like to be a minority; playing in a reggae band during my university years and eventually marrying a man from another culture–albeit Caucasian like me– and eventually moving abroad.

Perhaps I was destined to live in The Hague, the international city of Peace  & Justice. I am neither a majority or a minority, I am simply one nationality among many, all taking the same trams, going to the theaters, planning a weekend trip to the beach. My son’s Dutch elementary school has more than 40 nationalities. I’m pretty good at spelling, but am seriously challenged when I try to spell the names of his friends and schoolmates: Abdounoor (spelling?) Rashinella (sp?), Gonjhairo, Basit . . . you get the picture.

My hometown has a population of 5,245.  The Hague is a wee bit bigger. I particularly like the category of ‘other’ with a population of 129,242, which makes up close to 25% of The Hague’s population. Come to think of it, as an American, I am the ‘other.’ 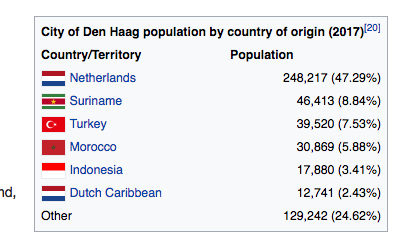 My home town breaks down a bit differently:

I still love Solvang, and the Santa Ynez Valley in which it is nestled and wouldn’t trade my upbringing for anything. I am grateful to have maintained contact over the years with friends from this precious time in my life and I still consider this beautiful valley my home. But I am also thankful that my son is growing up bilingual in such a culturally diverse world.

Do you still live in your home town? Or have you traveled far from your place of origin? What has it done to change you? If you’ve lived away for a number of years, would you be able to move ‘home’ and assimilate, or do you think it would cramp your style?

(Strange. I wrote this post on April 29th and it published as March, 2017! What’s going on WordPress? Or is this an operator error?)