It’s been a hard week: Husband sick, son sick, a friend suddenly taken to the hospital for an appendicitis,  T. winning the U.S. election. Regarding this last sickness, how did this happen and what does it mean for the future of America? The future of the environmental policy, world trade, communication and politics?  The security, rights and liberty of fellow Americans who don’t happen to be white and male? These are the questions on the minds of many.

The shock from the election is so pervasive in The Netherlands that when friends and acquaintances in this multi-cultural country see me, one of the first things out of their mouths is along these lines:

“My condolences.”
“You must be shocked.”
“How are you holding up?”
“How did this happen?” 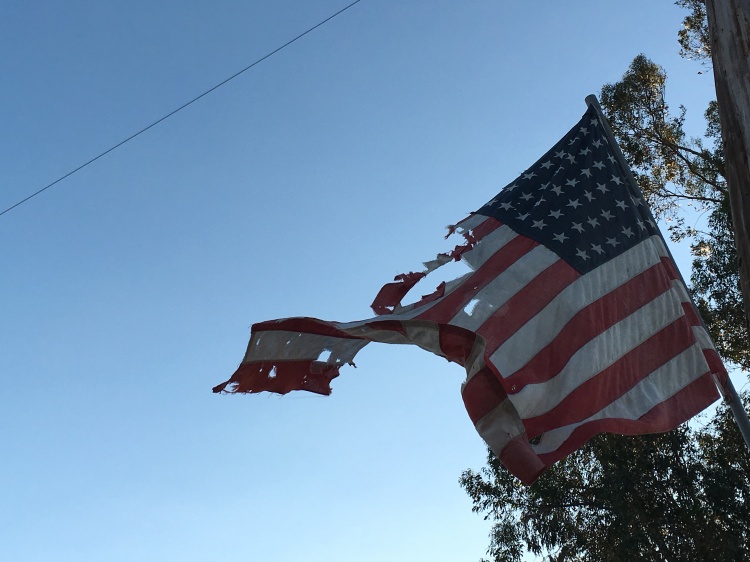 Just as this tattered Old Glory is sacrilege, so is the hate, sexism and racism so rampant throughout the Trump campaign. I understand in a way how Trump happened–people are angry and fed up with a system that makes the rich richer and everyone else poorer.  I understand anger, but not the anger that got him elected.

My anti-establishment, no more business-as-usual anger was of the Bernie Sanders variety; an anger channeled into positive change with clear, decisive actions and planning to make it happen. I believe the anger that got T. elected spawns from a darker source filled with fear and hatred of the ilk found in this Facebook collection of posts called ‘Day 1. Trump America’.

Not even 24 hours yet. My friend’s sister, who is Muslim, had a knife pulled on her by a Trump supporter while on the bus by UIUC campus. (November 9th, 2016 tweet by Sarah Harvard)

One of the posts also shows a caucasion male being beaten by a group of African Americans. His crime? Voting for Trump.

And on the flip side? How about this photo?

According to this collection of tweets and Facebook quotes, Latin American children, Muslim women and African Americans are being threatened and told to ‘go home.’

Yet America is their home. Their country, your country, my country, just like the song goes: My Country tis of thee. Sweet land of liberty. Of thee I sing. But in the current state of affairs, I wonder. My Country ‘Tis of Who? I don’t know anyone who voted for Trump, and I don’t recognize the America that has been showing its colors this past year.  I’m extremely concerned what will happen to our country under his leadership.

According to a New York Times article this morning, Trump is planning to enlist Mr. Ebell to help take on the U.S. Environmental Protection Agency. Activists labeled Ebell as one of the top seven “climate criminals.” My stomach is turning at the thought.

Mr. Ebell, who revels in taking on the scientific consensus on global warming, will be Mr. Trump’s lead agent in choosing personnel and setting the direction of the federal agencies that address climate change and environmental policy more broadly. See full NYT Article here.

Because all of the four-letter words just weren’t enough to express our frustration, we introduced a five letter word to our collection. The ‘T’ word is an expletive we don’t even want to hear in our household at the present moment.

This is not a spontaneous, reactionary missive. It has been slowly building during the last year as I’ve read and viewed the racist, sexist things that T. 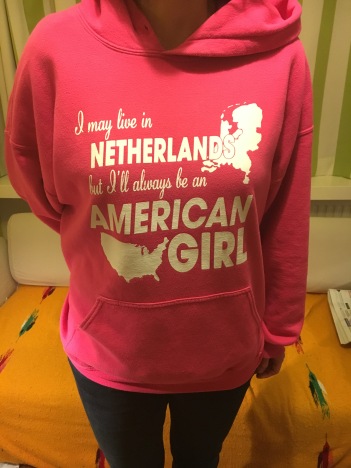 has said during his campaign and throughout his televised, caught-on -tape life.

Although I am an American living abroad, I am still an American and I still relate to my culture. But since Tuesday’s election results (hell, since the beginning of the campaign!), I’ve felt less enthusiastic about donning my former favorite sweatshirt.

Looking for a kernel of hope, I turn to Bernie Sanders to see how he’s responding (after of course his campaign’s initial post-election response of “We have nothing nice to say right now.”).  Here’s a Berning quote that gives me hope.

“To the degree that Donald Trump is serious about pursuing policies that improve the lives of working families in this country, I and other progressives are prepared to work with him. To the degree that he pursues racist, sexist, xenophobic and anti-environment policies, we will vigorously oppose him.”
~Bernie Sanders Facebook Post on Wednesday, November 9th, 2016.

What if Trump America (excuse my French) won’t be the racist, sexist, mysoginist, wall-building, isolationist, climate-change denying country we think it will be?  It isn’t a one-man government and there are protections in place, politicians with years of experience, a whole checks and balances system built into governance.

What if he can actually deliver on his big promises of employment for everyone, and an America for all Americans? (Just to clarify, Mr. Trump, all Americans = every U.S. citizen, no matter race, country of origin, disability, religious affiliation, sensuality or lack thereof, sexual orientation, gender or party line). Perhaps there’s a silver lining somewhere in there, waiting to be discovered or revealed.

Or as my mother (jokingly?) said yesterday morning, perhaps the End Times really are near.