There were four of us at the table, and six of our little people among the masses of children jumping and screaming on the indoor trampolines. We sat on the hard metal stools drinking cappuccinos, our mile-a-minute conversations flowing; the music blaring over the loud speakers mixed with the  high-pitched screams of fright and pleasure a familiar soundtrack of motherhood.

Despite a median age somewhere in the mid-forties, we seemed more like teenagers the way we each fondled our smart phones, engaged in multiple disjointed conversations randomly interrupted by work-related texts, the display of YouTube videos and Facebook posts. We volleyed between bouts of concentrated dialogue dedicated to one topic and bullet point statements interspersed with interruptions both physical and virtual.

A: “I’ve been drawing lately.”
B: “Ahh. Check out these photos from my friend in Italy.”
R: “Shall I get another round of lemonade for the boys or can they share your pitcher?”
K: “Those photos are beautiful . . .”
A: “I drew this one for my nephew.”
B: “You can share our pitcher.”

I haven’t always been a smart-phone-toting, attention-deficit disordering conversationalist. Much to the frustration of friends, family and co-workers, I used to be one of those people who left my cell phone at home or didn’t even bother to check it when I had it with me. I refused to have it in the same room with me as I slept, not wanting the disruptive electromagnetic radiation near me and my loved ones. I even considered my friends who couldn’t seem to put their cell phones away as not only lacking in social graces, but clearly bored with the idea of living their own lives.

But then I got an iPhone for my birthday last year. Not only an iPhone, but the latest and greatest iPhone 6s. My eyes gleamed with the same excitement as my son’s when he gets a new Lego set. In Amsterdam and Los Angeles I saw billboards with stunning images taken with the iPhone 6s. Friends envied the amazing photos I could take, and the billboards dominating the airspace along the Los Angeles freeways during my summer visit seemed to buoy my sense of being on the cutting edge. Friends nodded in approval when they saw my phone as if I’d accomplished an impressive feat, when all I had done was unwrap a present from my husband. I don’t follow the trends when it comes to latest technology and I was surprised to be on the forefront, if even for a nanosecond. Oh, but where was I?

“Here’s a design I did for my coffee mug,” A. shared as her eyes darted between us and the series of pictures of her artwork she had pulled up on her phone—pastel water colors of names painted in calligraphy-like letters, cityscapes and other daily life mages. The children came and went like parakeets in a city, flocking to us and making short work of the beverages and snacks before fluttering off again.

Our attention shifted back to her artwork. One beautiful piece had a batik-like background in the shape of an African nation.

“I made this one for my maid. She’s from Ghana.”

This particular piece reminded me of an art opening I had attended the night before about immigration, culture and crossing borders, with art by husband-wife team Anna Kurtycz and RUDEK. I scrolled through the pictures I had made and the conversation segued to this current exhibition at the Victor Laurentius Gallery in New Babylon. 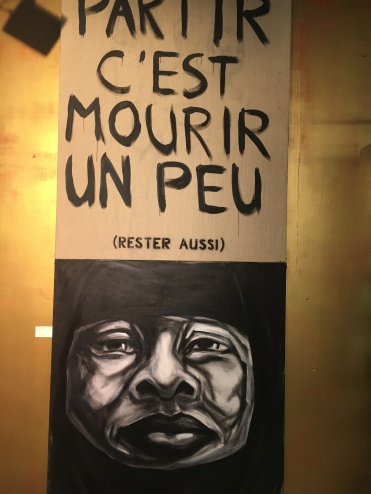 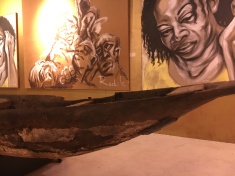 The topic of immigration made the rounds, our various opinions about poverty and taxes and the wealth of nations somehow morphing to food and culture. A Facebook post popped up with a photo of a new nephew born that day. We marveled at this tiny baby boy before we sped off to a series of photographs featured in a Time article entitled Hungry Planet: What The World Eats. The pictures of families from around the world surrounded by the foods they consume within a week held our attention spans for a good seven minutes before we were onto YouTube videos of Hillary with funny voice overs, a magazine suggesting that yellow was the hip color of the season and handing over change to the kids to purchase ice cream.

Conversations held during mom get togethers with a flock of children in tow have always been a bit disjointed. But this outing spoke of a new level of mom-multi-tasking ADD. Would I go back to my pre-smart phone life? Not for a second. Our interaction was media-rich, stimulating, exciting, fast-paced. Is my ADD behavior getting worse? I believe so. I can’t even tell you if I have presented today’s events in chronological order. Now that I think about it, I think that we looked at that glossy magazine at the beginning of the afternoon, not just before we left.

As I clicked on a new What’s App message from a client, I heard something that threw me.

“She has the iPhone 7,” R. said, pointing to A.’s larger, sleeker phone. It happened, just like I knew it would. I am no longer jogging out in front of the pack. The slightest ping of disappointment was quickly outweighed by relief: I could slip back into my more comfortable technology role of late adapter.

As we collected our red-cheeked children and prepared to head home, I felt like one of them: overstimulated, excited, exhausted. I thought about the old days. Hand-written letters, a well-worn notebook to jot down your thoughts, the heft of a hardback dictionary in your hands.

Maybe I’ll write a letter when I get home or read an old-fashioned paperback book; dim the lights, close my eyes and go into meditation. Something to balance out that media-driven, thoughts-akimbo afternoon.

Yet here I am back on another screen, writing a blog post with post-dinner plans of picking up where I left off on the eBook version of Sarah Mann’s Hold Still.

The title of her memoir comes from Sally asking her children on countless occasions to Hold Still as she takes their pictures, the hours of concentration demanded of both subject and photographer to get the perfect picture, the tedious and time consuming process of developing the film. This process required every ounce of concentration dedicated to the present moment, and then to the moment after that. Can anyone Hold Still anymore?

3 thoughts on “Hold Still: A Disjointed Account of Four Moms on a Saturday Afternoon”