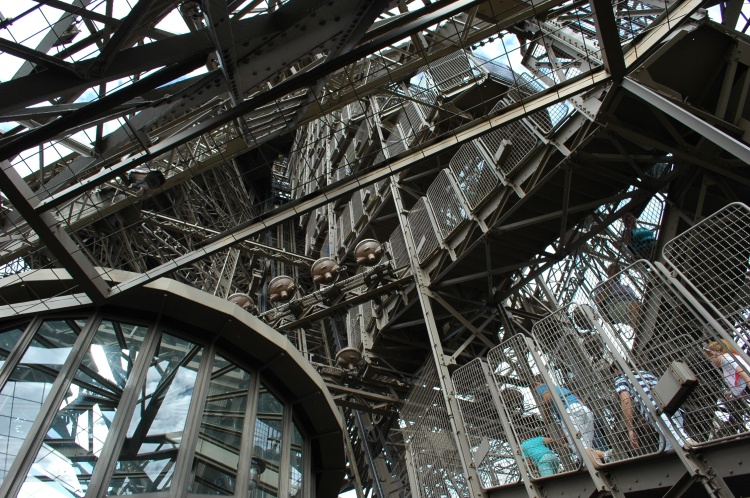 Climbing the steps of the Eiffel Tower last week gave me a sense of accomplishment, as if the Eiffel was on a bucket list I hadn’t even written, but was somehow ingrained in my system as an American.

What does the Eiffel Tower have to do with being American? Structural engineer Gustave Eiffel also worked on the Statue of Liberty, which was given to us (the U.S.) by France as a commemoration of the alliance between France and the U.S. during the American Revolution.

I felt safe in this massive structure until I overheard a tourguide saying the Eiffel Tower receives 58 million visitors per year. Say what? That’s like 20% of the American population, or three times the population of the Netherlands. Wouldn’t the metal steps and the cables of the elevator be worn out with the coming and going of so many humans?

Yet an online search says its only 7 million per year. Seven million is no small feat; that’s about 1 visitor every 4 seconds, 24 hours per day. Perhaps she was saying 5 to 7 million. If said quickly, that could sound like 57 million.

My recommendation: a must-do. Don’t stand in the main line for the elevator that goes straight to the top, but go to the shorter line to climb the first few stories and then catch the lift to the top. Climbing the steps gives you a much more hands-on sense of the structural detail of the tower and you can watch the people on the ground turn into ants (get smaller) at a much more gradual rate.

Tip two: Unless you enjoy the sensation of being mildly squished by throngs of other sweaty tourists every step of the way, don’t go in July!